Improv - how it started for me

Improv piecing seems to be getting more and more exposure these days with new books written, just-made quilt tops shown off on blogs of many quilters, and attention from the (modern) quilt community. Thanks to a mention by my friend Lara B of BuzzinBumble, I recently found a new initiative from Ann (Fret Not Yourself) and Kaja (Sew Slowly) to get together quilters interested in improv quilt making. There are regular posts on their blogs, showing their own work, but also with ideas, suggestions on things to try, a button, and even a monthly link-up! Not wanting to be left out (I haven't enough to do, ha!) I intended to start on one of the many ideas I have swirling in my head and start a new improv piece. However, with less progress on the current QUIP (as mentioned in my previous post) than wished for, I felt I couldn't. And since I am not without improv work to show, here is the story of "one I made earlier".

For me the improv journey started several many years ago, around 2008. At a weekend retreat organised by the Quilters Guild of Ireland I did a workshop with a guest teacher from England (I'll edit to include her name when I remember it, sorry!) on the use of large prints. Until then I had been piecing my quilts with accurate measurements (using templates and/or the one or two rulers I possessed) and a plan (though they often did get adjusted halfway through). I had never heard of improvisational piecing, and the online quilting community wasn't much on my radar either... As it turned out we were making large(ish) blocks using our large print and coordinating fabrics, and chopping them up to make the print not too overwhelming.

The result was a collection blocks of varying shapes and sizes without any further plan or pattern: 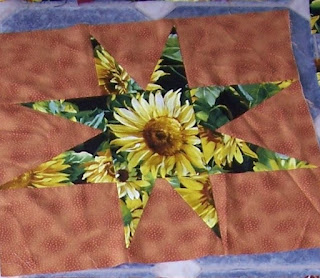 As I worked on these blocks, my work got more improvisational with each subsequent one. The blocks were reasonably large, and though they started with a block "recipe" in mind, most were made without ruler, and definitely without accurate measurement. I got more daring as I went on, and I enjoyed myself more and more that day.

As often happens with workshops (with me anyway), it was a year or so later when I dug up the blocks again, remembered how I had enjoyed the process, and started to put them together into a top. I laid out the blocks I had (about 8 or so), made a few more, and started sewing them together, filling gaps with strips and pieces anyway I felt like. I added some new fabrics (I could not find all of the previously used ones by now...), and chopped, trimmed and changed what was already there. Eventually I ended up with a top of reasonable size (49" x 76"). I did have to deal with only one partial seam to make the piece lie flat, and even that could have been avoided if I had been willing to unpick a few seams. 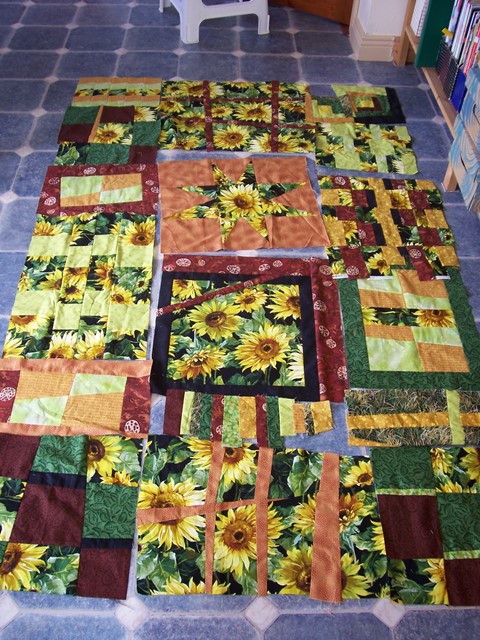 I think starting off my first improv piece doing one block at a time was great. I started playing with some regular block ideas and got gradually more "free" with each next one. Because I used the one large print as a focus fabric I knew that all pieces would happily live in the same quilt, even when the quilt as a whole was never planned in advance at all. It has become a quilt that I would not have made if I had thought about the finished product when I started, and it is not my most favourite quilt, but I do like it a lot. And I learned this:

I love most types of quilt making, but working on improv gives me a buzz! Almost like knowing how to walk and run, and then being allowed to dance... 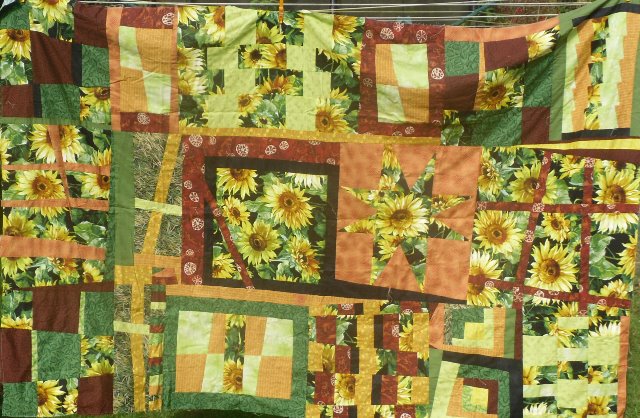 The blocks are all quite simple, many are just strip pieced, then sliced and sewn together again. Others have inserted strips across the main print. There are some wonky log cabins, and variations of four-patches and nine-patches. The two in the middle are what I started with, as you can see, not that much improv yet; the star is barely wonky! I got a bit more courageous as I made more blocks.

The plan was (and still is) to use this quilt to practise my machine quilting. The striking colours and busy piecing would hopefully distract enough from my "trial and error" ability at that skill, although I have done some quilting in the mean time so it will hopefully not be as bad as envisaged at the time.

In the years since this "Sunflower" top I have done quite a few improv pieces. A few are finished, quite a number are not, and one has even deserved a place on a wall in my home. But there are still so many ideas I would like to try, I am surely not finished with improv for a long time...

Linking up with
And now I better get on with quilting, I'm off to sew, of course!