The end of summer and Happy New Year

Hello everyone and Happy New Year!

"WHAT??!!!" Well, I find the start of September more like the start of a new year than the first day of January! Let me explain.

While our calendars all change with January, every year without fail, in most other aspects it does not feel like the start of something new. The schools have days off from a few days before Christmas right through to several days into January. And then they all go back to where they were before Christmas! Same class, same school, same books, same dark, cold days! The only difference is that number that designates the year - and even that seems to catch on only after a week or more - or am I the only one writing it wrong for at least three weeks after it is supposed to have changed?!

On the other hand, September brings change right from the start (and often a few days early, too):
New school or at least a new school year,
New school uniform, not yet baggy and worn,
New school books, all crisp and newly covered in undamaged plastic,
New copies (notebooks), all those new starts on blank pages!
New routines, especially after being used to no routines for those long summer months,
And even, it seems, a change in the weather with spider webs and mushrooms popping up everywhere!
And, for me at least, a new start after the unstructured days of summer. Being on my own much of the day after waving them all out the door early in the morning. Free to make my own plans...

So this September sees me making resolutions. And writing on the blog again. And sewing, so I'll have something to write about, too!
It is early days yet, and I am still adjusting to the changes to my days. But there are blog posts being planned, and patterns, and sewing, and tutorials...

All in all a NEW START.

And to show that I have not been completely idle over the summer:

This interpretation of the 1 hour basket - a free pattern that used to be on Craftsy - will be winging its way to my secret #mqisummerswap swap partner in the coming days... It will be hard to let go! 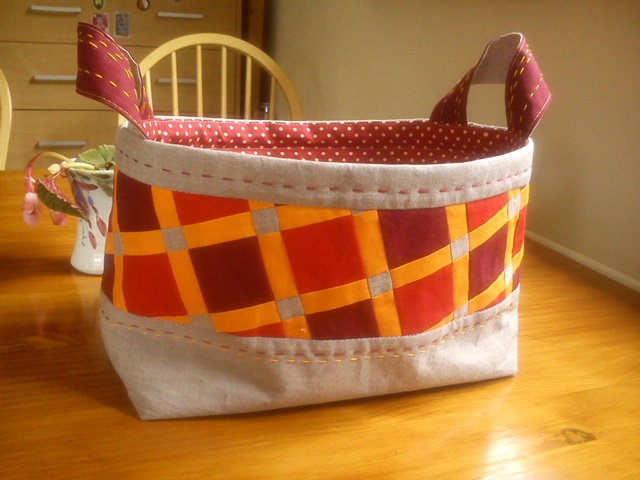