Over the summer I participated in yet another swap. I am saying "over the summer", but that's not quite how it went.

Organised by the Modern Quilters Ireland (who unfortunately no longer exist now - how did that happen?!), we were going to make and swap a Goody Goody Binding Kit from a pattern by Lella Boutique. In June the swap was opened and after a short deliberation I signed up. After all, the deadline was only early September. Plenty of time wouldn't you think?! 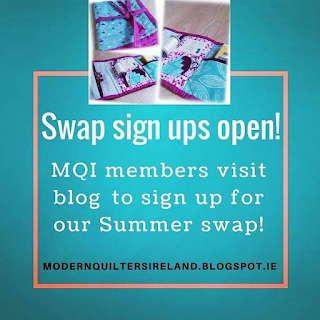 You can guess what followed. I posted a mosaic to help my partner decide what to do. Which probably was no help to her at all, because I liked any picture of any of the binding kits in question. No surprise there really, anyone who has a look around here will see how eclectic my makes are.

And I added it to my Finishalong list for the third quarter.

Then I went on holiday. Which, by the way was absolutely brilliant! I should have posted about it... maybe I still will? Oh yes, let's check on my partner and finalise those plans...

The boys were home for the summer months. The sewing kitchen table was continually occupied. And inspiration hadn't really struck though I did have some vague idea. I should look up that pattern again...

Exam results came and went, debs/balls were prepared for and attended, college places awarded, accepted. Oh yes, I need to really look at that pattern...
Student accommodation was finally arranged (housing crisis, anyone?), college supplies purchased... My idea needs to be firmed up...

Suddenly the deadline was about a week away!
I wanted to go for a dog theme since my partner loves her Bassets, but how?!

I considered sewing small squares with doggy fabrics for the outside of the kit, but someone else seemed to be doing squares already. I thought of a pieced star for the front, but it would have to be teeny, tiny to fit onto the front. And how would that incorporate a dog?
Maybe the dog should go on the inside?
And what fabric to use? Bright. Solids?

Then I started drawing. A dog. Mmmm.
And I took out my bag of solids, not too much there. Though plenty of small scraps.

Finally I made a decision. And posted this on Instagram as a teaser: 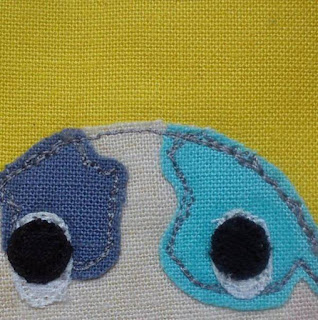 The  Goody Goody Binding Kit has quite a few pockets inside, and is ideal to use several coordinating fabrics in one item. I used a piece of fox print by Tula Pink for the outside together with some coordinating prints:


Then I made an appliqué basset to serve as the scissor pocket. I had such fun making that!

The inside is made up of several sections, and I was able to add some more dogs there, too. A zipped pocket, an open pocket, thread holder, and needle patch are all included: 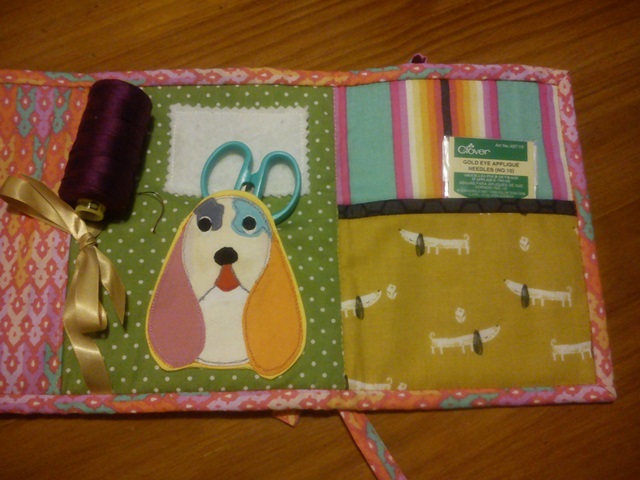 The kit was finished in time. It was even done a day before it needed to be sent off! Enough time to add a themed zipper pull (adding little details like that make me so happy)!


Sent off... and received... I hope Ruth will enjoy it for many happy sewing sessions!

And then, of course, I was due to receive one, too. With all the focus on making this one, I had forgotten about that! So I received a most stunningly quilted version myself from Erin, who had recently returned home to the US after spending some years here.

She chose to use all the colours of the rainbow, and each colour is quilted with a different pattern. Perfect! 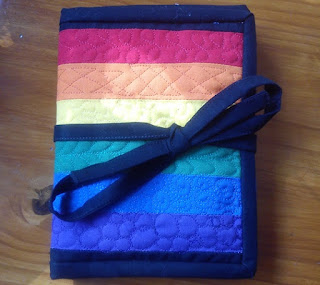 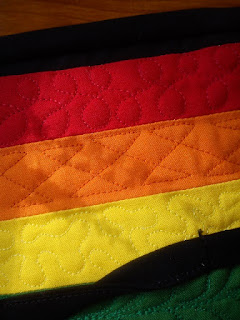 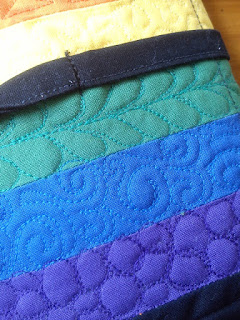 Thank you so much, Erin, it is truly treasured and in use a lot!