- This is a finishalong post -
If you want to see an overview of all my finishes (and non-finishes) in the first quarter of 2016, see my overview post.
My original goal setting post can be found HERE.

My second finish is this quilt:


The quilt has been a collaborative effort of members of the Library Quilters, the same group holding an exhibition at the end of February. And yes, this quilt was part of that exhibition. After it was decided that the quilt should be in the exhibition, I finally speeded up my needle and thread and finished it.
It seems I need strong incentives to finish a project. Even when all that's needed was hand stitching down the binding...

But, in the end only the result counts! And this has turned out to be a lovely quilt if I can say so myself.
The 12" blocks have been made by the different members in fabrics and a pattern of their own choosing. The only requirement was to use (some) blue, and some of us used a piece of the same blue-grey fabric. In the end there were enough blocks for two quilts, so I divided the blocks between the two for the most pleasing combination. The fabrics for sashing, backing and binding have also been donated by different members, and the wadding was "found" in my own shelves. 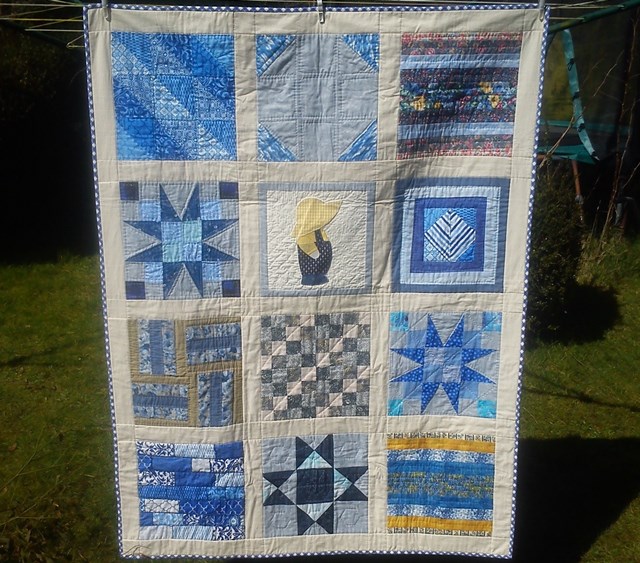 As you can see most blocks are pieced, but each quilt has one appliqué block. The blocks were cut to a uniform size or marked up to the same size in the case of a hand stitched block. I attached the solid cream sashing to the blocks according to this tutorial for a smooth finish to the quilt.

After I stabilised the quilt by machine quilting in straight lines around the blocks, the quilt was passed around the group to add their hand quilting to it. Each chose a block or two and quilted it as they liked.


It is surprising how well blocks from different makers with different ideas can come together into a cohesive quilt with only a couple of predetermined "rules".
The binding was made from a check fabric and to get the diagonal effect of the print I cut it on the bias contrary to what I usually do. I attached the binding (method here), then trimmed the quilt and, as mentioned in my goal-setting post, I hand stitched the binding to the back.
To complete the project I attached a label to the quilt (made according to this tutorial) in anticipation of its purpose to bring in money for charity.


I also attached a sleeve to the quilt, but I removed it again after the exhibition. 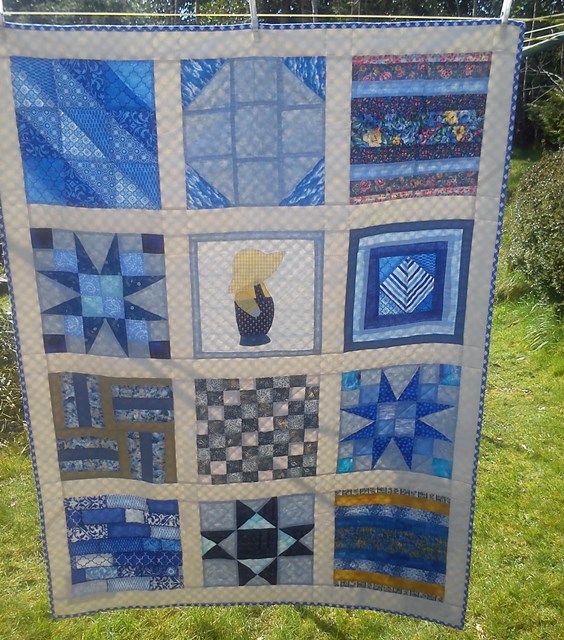