Early January I linked up a list of unfinished projects with the aim to get them finished in the first three months of the year.
Well, the three months are up and how did it go?

1. Hearty
In January: "This quilt top is sewn together, but several plain squares still need sashiko stitching in them. Then it needs a backing, and quilting and binding. Not sure I'll get it done, but worth a try."
Now: The sashiko is done. All plain navy linen squares and rectangles in the alternate improv blocks have been stitched with images taken from the "(More) Hearty Good Wishes" fabric line (designed by Janet Clare for Moda).


I decided I will add a border around the top as it is now, so even the top is not yet complete. But at least I have been working on it.
* NOT FINISHED

2. Oakshott
In January: "This quilt has been around since at least 2011!!! I loved designing and sewing this quilt in those lovely Oakshott fabrics (the picture does not do them any justice at all), but then made the decision to hand quilt it in a very labour intensive way. Let's just say I got fed up with it. However it's more than half quilted, and I still love the quilt, so it NEEDS to be done!" 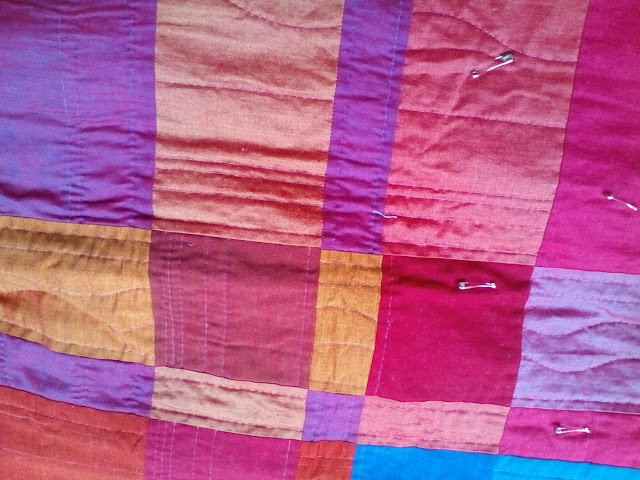 Now: I have made some progress...
* NOT FINISHED

3. Charity quilt no. 1
In January: "Ah yes, come on! Just the binding to be stitched down, no-brainer!"


Now: The blocks for this quilt were made by our local quilt group, and it was decided that we should include it in the exhibition we held a few weeks ago (see my earlier post about the exhibition). So yes, the binding was stitched down. I even added a sleeve to hang it, and a label (which led to a tutorial on labelling your quilts...). Now the sleeve has been removed again, and the quilt is ready to be handed over to a local charity soon.
* FINISHED - see link up post

4. Charity quilt no.2
In January: "A collection of 12 blocks, some sashing already stitched on. While I may not get this finished since the others involved may decide to hand quilt it between them, putting it here may at least push me to get the top together. I know that may mean I can not link it up as a finish in three months time, but as long as I am making good progress, I'm happy."
Now: Well, not happy then! No progress at all...
*NOT FINISHED

5. Knitted wrist warmers
In January: "An atrocious picture, I know! I don't do much knitting, but ever since reading Lynz' post on Susie Rogers' Reading Mitts I wanted to make some. The first one is knitted, the second one has not much more knitting to do. Let's just say I got distracted, but with the weather now turned decidedly chilly I will need them and soon! So I will finish the knitting, then finishing them off to give me toasty hands (hopefully)." 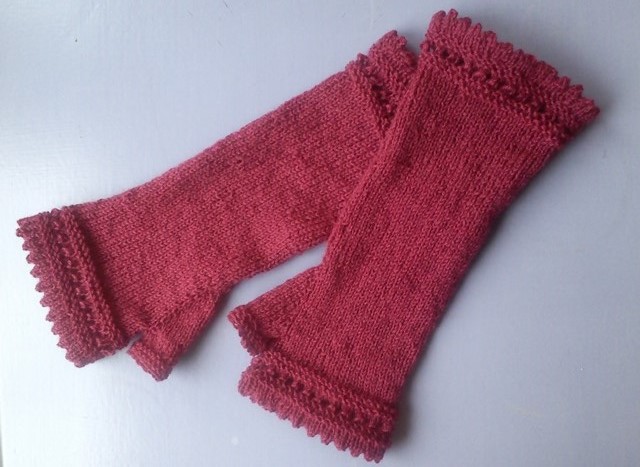 Now: The knitting progressed steadily, and they were finished before I had a bandaged finger and could not wear any other type of gloves.
* FINISHED - see link up post

6. Cubes quilt
In January: "Started in summer 2013 from my own design, this needs its machine quilting finished. Again, it'll be worth finishing!"
Now: No progress, not even looked at!
*NOT FINISHED